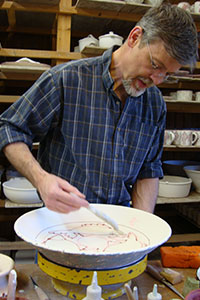 1985 – 1986 Masters of Art Degree in Ceramics (MFA) Cardiff School of Art and Design, Cardiff Metropolitan University, Wales, UK
My degree work involved the development of colour and surface in soda and salt glazed stoneware, and porcelain. My thesis was historical research; The Re-occurrence of Roman Classical Form (a survey of selected vernacular wares of Western Europe and North America) – 96 pages, 1986)
1973 – 1985 Part-time studies in Ceramics at Mohawk College, full time apprenticeship in the production Studio and Donn Zver, Troy Ontario, summer workshops most notably with the icon of British Ceramics, Mick Casson, Shelia Casson, and Andrew McGarva in 1981.

1981 – 1987 Salt glazed stoneware based on the traditions of Ontario and New England.

1986 – My current production is extensively decorated stoneware. The Pottery produces a wide range of domestic ware. Since 1980 I have worked with one full-time Potter on staff, and occasionally two. Some employees have worked as apprentices; others were hired as skilled potters. At last count there have been 25 skilled makers work with me in the studio, many who have continued in highly successful careers in ceramics. Concurrent to the regular production, there have been limited ranges of raku, slip decorated earthenware, majolica, cone 6 oxidation and porcelain. My work is sold through gallery exhibitions, selected shops and several outdoor art events. The primary outlet is my showroom at Barnim Pottery in Dundas, Ontario.
2003 – Islamic reduced pigment lusterware is an area of special interest to me. I focus on a limited production of lustre ware spring and fall each year. True lusterware is complex and difficult and a rewarding challenge.

2008 Halliburton School of the Arts, part of the winter program in Ceramics.

2007 Invited to take part in a panel discussion at the Gardiner Museum of Ceramics in conjunction with “On the Table” Panel was moderated by Harlan house, and included Bruce Cochrane, Jonathon Bancroft-Snell, and Sean Kunz.

2004-2005 Ceramic Mentor Project, I worked with a group of eight individual makers as a mentor for a 16-month period finishing with an exhibition at the Burlington Art Centre.

2008 Ontario Crafts Council, Sponsorship award for the One of Kind show and Sale for Christmas ’09.
2007 Fusion, Juror for the pottery and glass sale.
2005 Juror for the Muskoka Arts and Crafts Spring exhibition, Bracebridge, Ontario.
2001 Curator, Making Contact, McMaster Museum of Art, Hamilton, Ontario.
1996 Juror for a visual arts exhibition at the Art Gallery of Mississauga.
1994 Juror for the Ontario Arts Council Crafts Grants.

Selected recent exhibitions. Complete listing is over 140 exhibitions since 1978